The Foxgloves / Maygen & The Birdwatcher / Luke LeBlanc -
Skip to content 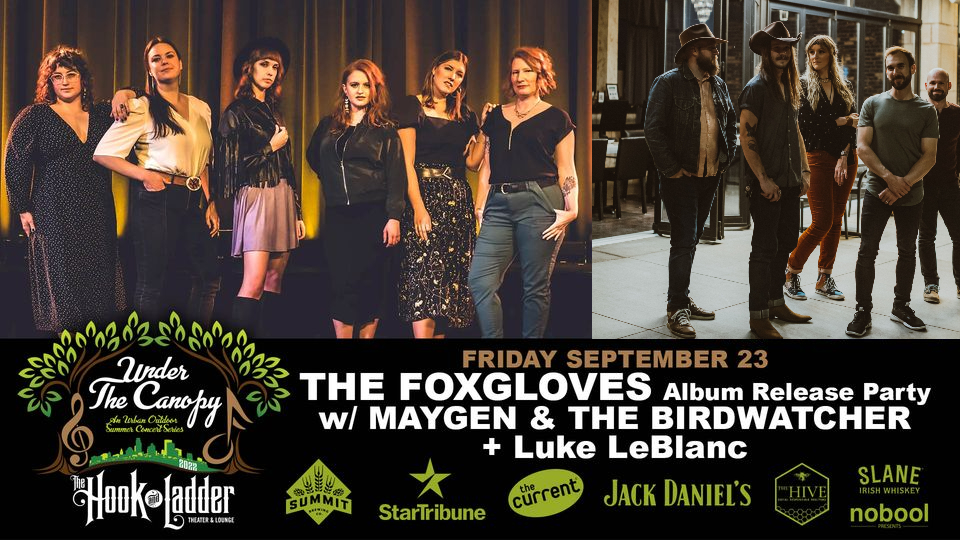 The Foxgloves are an all-female band with songs you won’t be able to stop humming. Their engaging presence, rich instrumentation, compelling storytelling songwriting, four-part harmonies, and creatively reimagined covers render them a force to be reckoned with. This powerful band is making moves you’ll want to witness. A little bit of country, a little bit of folk, a little bit of classical, and a whole lot of heart — your toes will tap of their own accord.

Coming off the successful release of their “stunning” (Americana UK) debut full-length album, Moonshine, which earned them Midwest Country Music Awards for both Album of the Year and Americana Artist of the Year, Maygen & The Birdwatcher are hitting the ground running. Described as “an exciting goulash of Kacey Musgraves, Chris Stapleton, Florence + The Machine and Joe Cocker” (MostlyMinnesota), the band showcases original songs, fantastic harmonies, and tight musicianship that keep you anticipating what they’ll deliver next.

“In many ways, Maygen & The Birdwatcher feel like a collaboration between two distinct artists versus a more seamless band– but it’s that individuality, those visible seams, that make them such a fascinating act.” – Adventures In Americana
Luke LeBlanc is a Minneapolis based singer-songwriter whose music is rooted in folk, rock, and American roots. He has shared the stage with Charlie Parr, the Nitty Gritty Dirt Band, and Erik Koskinen, among others. His latest album, produced by Koskinen, is entitled Only Human and was released in 2021.

—–
The Award-Winning* Under the Canopy series at The Hook & Ladder Theater returns with it’s uniquely seasonal urban footprint to the Longfellow neighborhood of south Minneapolis in 2022.*Voted Best in MN 2021 by Star Tribune readers.

Come hungry and enjoy dinner with the show!
The Hook has committed to having an eclectic variety of food trucks rotating Under the Canopy throughout the 2022 season for our guests. Please feel free to tell us anyone you’d like to see serving food UTC this spring!

$2 OFF An Arbeiter Brewing Pint!
Come enjoy a brew or two before or after any Under The Canopy Concert. Just show your purchased wristband and receive $2 off a pint! It’s only a few doors down from The Hook and Ladder.
*Some exclusions apply